This week saw the historic achievement of a 99-year-old war veteran, Captain Tom Moore, reaching the top of the singles chart in his continued efforts to raise money for the UK’s National Health Service.

Capt. Moore hit the headlines for completing a sponsored one hundred laps of his garden before his 100th birthday, and in the process raised tens of millions of pounds for NHS Charities Together.

He is a shining example of what it means to be human! His efforts humble me but why are we so surprised that the older generations still seek out ways to be useful and proactive in society?

The other day, as part of my marketing role, I had to find an image to convey a sense of wisdom being passed from one age to the next and thought to encapsulate it in the meeting of two hands: one old and one young. A simple enough prospect, one might suppose, but what I encountered shocked me.

In my line of work it’s a crucial skill to be able to articulate the nuances of an image and identify its biases. Overwhelmingly these subtleties fall below the conscious radar of the viewing majority but one thing is certain: the message is, nevertheless, being received loud and clear. Imagery has become incredibly powerful in today’s digital world precisely because it is so good at instantly communicating surprising layers of complexity.

So what was so shocking? Included below is a sample of the results given from the Google Images search term, ‘old hand young hand’ and, apart from the clear juvenile examples, virtually all the remaining results illustrate young people administering care to the old. 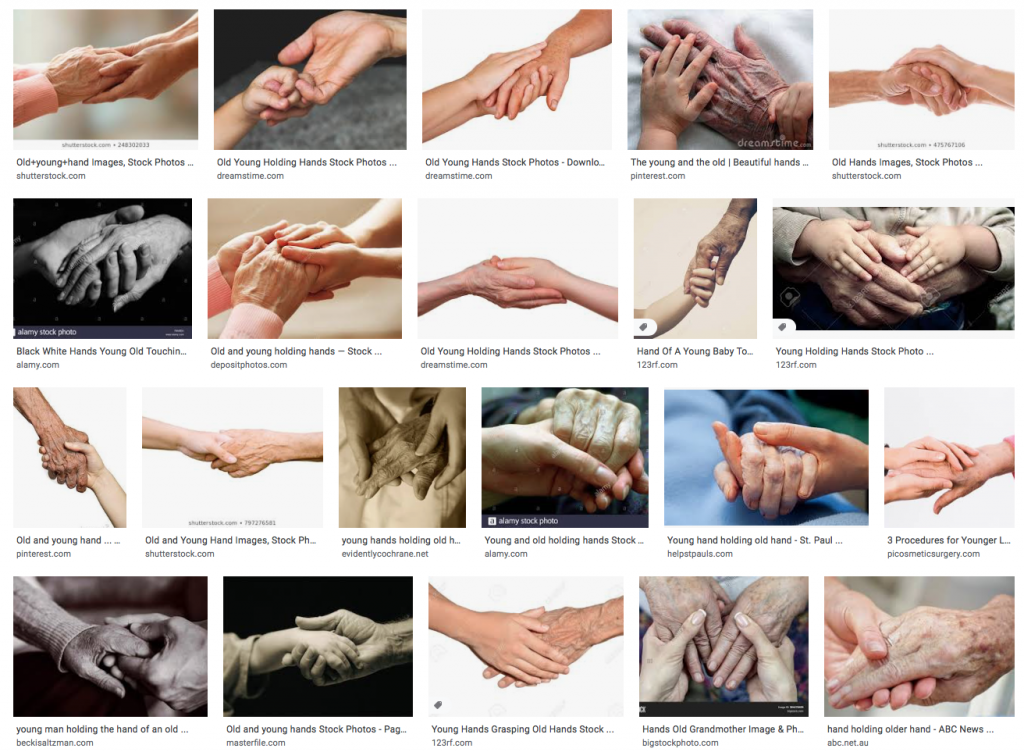 So what’s so bad about that? Nothing! Am I against the young doing their part in assisting a generation who, through simply growing old, are no longer able to care for themselves in the same way? Absolutely not! What disturbed me was the almost ubiquitous representation of the old as passive dependents.

In most of these images, the young are depicted as comforting their older counterparts, tending to them, supporting them; the more I looked, the more of it I saw. And, in its sheer volume, it morphed into something a lot less well-meaning: patronising condescension. The dearth of imagery illustrating the rich mine of experience, wisdom and humanity that still resides in the hearts of our older generations, is shocking to me.

A few years ago, David Lammy MP (Tottenham) and others were critical of Comic Relief’s ‘white saviour‘ fundraising methods which relied on perpetuating the stereotype of institutionalised impoverishment of the African continent. Are we doing the same disservice to the old and creating a sector of the population who, regardless of the complexities of context, are rarely seen outside the framework of dependency?

Representation is an issue that can set off many an eye-roll but it is, nevertheless, hugely important. For a well-rounded, cohesive society to exist there needs to be fair and proportional representation of all its intertwining sectors whether that be women, ethnic minorities, LGBTQ communities, disabled people, or the old. Of course, growing old can take a heavy toll on the human body and mind, and the resulting reliance is something of which we, as younger generations, should be rightfully mindful. But the old still have so much more to offer and that needs far more and better representation otherwise we will simply continue viewing the old as little more than beneficiaries of care.

Part of the newsworthiness of people such as Capt. Morris is that he, in his myriad tours around his garden, has also stepped outside his prescribed passive, dependent role and dared to venture into proactive and independent territory in order to contribute to his wider community. As with ‘white saviourdom’, it may be part of the engine that raises vast sums of money but are there hidden costs on such reliance on the extraordinariness of an act of altruism in the old?

Much ado about nothing

This site uses Akismet to reduce spam. Learn how your comment data is processed.